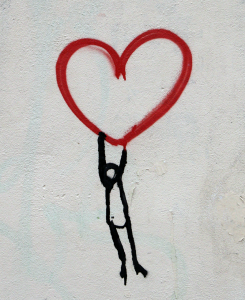 Everyone experiences dark times at some point in their life. This is something we, as sentient beings,have in common. As human beings, no matter what our political affiliation or what our ideology may be,suffering is as much a part of our lives as breathing is necessary for continued survival. But no matter how bad things may appear to be, there is always a ray of light carrying with it the promise of a better day that often accompanies hope.

Michael was the epitome of hope. No matter how bad things got in the prison we both resided, he managed to see things as opportunity with endless positive potential. Hard to do in a prison
environment. We were neighbors in a fairly relaxed prison setting. His outside lifeline was Gib, a friend of his in Minnesota who he communicated with for several years. At the time the only thing I knewabout Gib aside from being Michael’s friend was that he lives in Minneapolis and that he is a Quaker.

One day Michael told me that he had been informed that he had a brain tumor. Anyone else would have
been devastated by this news but not Michael. he held out hope that treatment would extend his life and
all would be well. It was much later that I learned that the driving force behind his optimism was his
frequent telephone conversations with his friend Gib.

Eventually Michael’s condition deteriorated to the point where he could not formulate coherent words
and it became impossible to accomplish simple tasks like getting to the bathroom or letting people know
what he needed. At first I helped him get to the restroom and with his phone calls to Gib. The more I
worked with Michael the more I was able to understand and translate his garbled words which helped
me to let staff and his friend Gib know what he wanted to relay. I did his laundry, picked up his meals
for him and cleaned his room. Soon other guys in the unit we were housed in stepped up to assist so that
he could avoid being sent to the medical unit to die away from friends and outside contact. Throughout
this ordeal Gib faithfully called to inquire about Michael’s well-being and get updates from me regarding
his condition. During these conversations Gib and I realized that we shared many beliefs especially our
common interest in peace and kindness. From that experience a friendship from afar formed that
continues to this day.

Even our best efforts to help Michael stay with those who he knew and trusted just wasn’t enough. His
health declined to a point where he had to be transferred to the medical wing to live out his last days. I
visited him often but Michael was heavily sedated and could not respond. I would tell him that Gib had
called and inquired about him and sent loving prayers his way. I doubted that Michael could hear me but
what was the harm? One day Gib sent me a letter to read to Michael. The stamp on the envelope had a
depiction of John Lennon, Michael’s all-time hero. I visited the dying man six times in a week to read
him the letter but he was always in a deep asleep. Finally one evening as I sat next to him and I simply
stated, once again, that I had a letter from Gib. Suddenly he opened his eyes wide and smiled. I quickly
read the letter to him which was dotted with Lennon quotes. and pointed out the postage stamp of John
Lennon. The last lines on that letter were; “Yeah, we all shine on, like the moon, and the stars,
and the sun”; He smiled brightly and instantly fell asleep. He died late that night.

Gib was a true friend to Michael. He never judged, he always encouraged but more important to
me he exemplified what true kindness and friendship really looks like. An inspiration that
continues to motivate me to help others no matter how difficult or challenging the situation is. If
we all could do that we would all shine on together.

The group encourages its members to take tangible ...

Tonight I’m working on a letter to a guy who’s spe...
View All

To whom it may concern: Not a lot of people care about guys in jail. Gib Pellet and his f...
Otherwise forgotten
View All
Common Ground Outreach © 2022 All Rights Reserved